The Calais Jungle: discerning fact from fiction among the rumours (RIB volunteer Nancy Dent for The Independent)

“If we had twenty of her one year ago, the population of the camp would have been halved by now.” Rowan Farrell is referring to Suzon, a French lawyer who has given up her job in order to offer information to refugees in the Calais migrant camp about their legal rights.

The camp is preparing for a full eviction that could start as soon as next week. No official notice has been made by the authorities, but it has been made clear to NGOs that the demolition date is approaching.

Rowan is the co-founder of the Refugee Info Bus, a project that provides access to technology and information to the residents of the Calais Jungle. Suzon is one of many lawyers and legal practitioners who have come to the camp to alleviate some of the problems here. Sitting in Khyber Cafe, it is clear that people are looking hard for the answers to their questions. Previously, the Info Bus has provided workshops on the legal rights of displaced people in Europe, as well as information about the Dublin Convention, Brexit and the various asylum systems across the continent – but now the conversations are turning towards the impending eviction of the camp.

It is 2pm, and volunteers from the legal centre and the Info Bus are scattered around the restaurant, holding workshops, surrounded by huddles of refugees. It is noisy – pockets of conversation buzz with the ebb and flow of tense questions and complicated answers, as volunteers aim to answer the questions of as many people as possible. “We try to hold as many workshops as possible, so that we know that we have reached as many people as can”, a volunteer tells me. This is the crux of the problem: information can only be given out on a person to person basis, and there is a danger of rumours distorting what little facts are known. 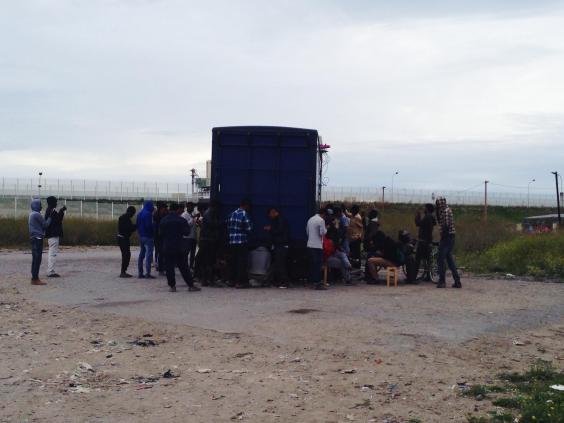 The Refugee Info Bus is one of several projects attempting to address this issue. Help Refugees are distributing documents in English, French, Pashto and Arabic that contain information about the evictions and how refugees can prepare for them. Bold letters warn the reader that “THESE DETAILS COULD CHANGE”.

Previously, the authorities had mentioned Monday 17 October as a possible eviction date but the Calais prefecture vehemently denied such claims: “The date is not yet known. The objective is that the demolition will be finished before the start of winter.”

The French state has not sent representatives to clarify this to the residents of the camp, nor to the NGOs working to support them. “They haven’t pinned a notice up and no one has told us officially what is going on”, Rowan says. I am also told that the first indication of the date of the previous evictions in February was a local bin man disclosing the end date of his contract to collect rubbish in the south side of the camp. That eviction saw 3,000 refugees forced out of their shelters – this time, it will be 10,000.

The lack of concrete facts makes it impossible to plan for the future. On a daily basis, Suzon deals with a frenzy of questions about where to claim asylum and in which direction a journey should continue. Smuggling prices have gone up – should asylum be claimed in France?

Uncertainty is reflected in the faces of everyone in the camp. Sifat and Nazif are two Afghan men, who have both claimed asylum in France. They are unclear of the details: “We just know about how they want to destroy the Jungle. They want to finish the Jungle on the seventeenth of this month. But they also say that they are not sure. They are not sure if they will destroy the Jungle or not.” This lack of concrete information is concerning for the men. They cannot plan for anything beyond next Monday and they do not know if they will get a place on a bus that will take them to one of the promised CAO centres.

The following information is what we do know: the French government will evict the Calais Jungle, and this will happen by the end of the year at the latest – but probably sooner than that. The French government has promised to make enough space in accommodation centres (CAOs) for all of the residents who want to go. Tenuous facts have been passed from the authorities to NGOs, which have then been passed to refugees. There has been no attempt to impart information directly to the camp by the French state.

Information is being doled out individually, and the opportunity for facts to become distorted and misconstrued is prevalent.

Memories of the previous evictions in February are also raw. The demolition of the south side of the camp was violent, and everyone remembers the tear gas, rubber bullets and fire. This time, however, the authorities are bound to provide transport to the shelter accommodations that are spread throughout Northern France and Paris, but the buses haven’t arrived yet and people are unsure if there is a plan. Nazif worries that “when they destroy the Jungle, there will be a lot of problems.”

The issue is becoming particularly prevalent in the light of a lack of response by the UK Home Office to the plight of the unaccompanied minors in the camp. The French State has reportedly delayed the evictions for another week, supposedly to give enough time to investigate the claims of 1,022 children who live in the Calais camp and bring them to safety.

The question remains: how can a population of 10,000 people prepare for an exodus if they do not know when it will happen?